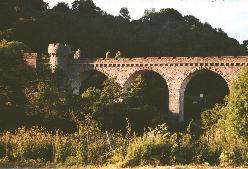 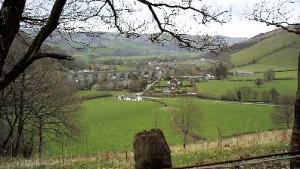 Knucklas, viaduct and the Teme valley

We are in the upper Teme valley in Powys, Wales but only about half a mile from England (Shropshire). The river Teme is the border between Wales and England here (although the map shows that the border doesn’t exactly follow the river, which has moved over the years!). From the village we can look across the Teme valley to see the ridge in Shropshire along which Offa’s Dyke runs. Our nearest town is Knighton, about 2 miles down the valley.

The village of Knucklas is Cnwclas in Welsh, meaning Green Hill (although some dispute this), no doubt because of Castle Hill at the side of the village. The village is the largest in the upper Teme valley (above Knighton), and the area includes a scattered population among the surrounding hills. We are only about 2 miles from Knighton, which has an excellent range of shops, coffee shops, hotels and pubs and other facilities. The B4355 runs by the village, from Knighton, up the Teme valley and over the hills to Newtown.

The population is about 350 and there is a mixture of types of home. Some very old traditional farm houses to new homes, and plans for more. There is a large estate of social houses, some privately owned.

Cnwclas is mentioned in documents back to the 13th century, often relating to the castle, and a search in Wikipedia will turn up much information (although some of it is rather unreliable). The story that King Arthur married Guinevere on the Castle Hill seems to have been a Mortimer invention! The castle site has never been properly investigated and the Knucklas Castle Community Land Project hope to do an investigation soon. It seems a likely site for an earlier hill fort, and there are many in the south Shropshire area nearby. Standing on the summit and looking around one feels that it would be a great place to put a castle to control the Teme and Heyope valleys, down which enemies from the Welsh hills would invade. More information is on our history page.

We are very lucky to have a railway station, on the Heart of Wales line between Swansea (about 3 hours) and Shrewsbury (about 1 hour). There are four trains each way each day (except Sundays). The track is single for much of the route and the station is a request stop. There are buses several times a day. More information is on our transport page.

The famous Knucklas viaduct is in the village and is a 13 arch railway viaduct built about 1860, and is a listed building grade II*. The line continues up the Heyope valley and goes into a tunnel to the village of Llangunllo. The section in the valley is the steepest on the Heart of Wales line. Occasional steam trains use the line and the viaduct is much admired as the train passes over.

The Heart of Wales Line Travellers Association has produced some information on the history and statistics of this fascinating viaduct – viaduct history. They have also produced a small pamphlet to celebrate the 150th anniversary of its opening: see here

and there is more about the village here –

There is a video of our rooks

by John Gohorry, a poet with connections in the village.

There is no shop or school (both long since closed), but there is a pub – The Castle Inn, and a community centre, see Community Centre page on menu above for details. The county library van calls weekly.

The only church in the village is the Baptist Church. Half a mile away, in Heyope, is St. David’s, which is the Church in Wales church for the village. Links are on our Local Information page.

There are many active clubs and societies, who mostly meet in the Community Centre; see details on our Clubs page.

There is a significant artistic community in and around the village,  see our Artists page.

Local tourist information is now available on a board on the Community Centre hall, with parking available. The Centre is near the station. Click the "Local facilities" button for more information.